SMART MONEY IS MOVING INTO GOLD AS VOLATILITY RETURNS

Two months ago, we hosted a conference featuring 25 world-famous asset managers, investment experts, and economists who discussed their economic outlook and predictions.

As you can imagine, these speakers usually don’t talk much about gold. They’re more concerned with stocks, funds, bonds, and the like.

But this year was different.

I’ve never seen so many high-profile investors mention gold as a safety net—and that includes some who were previously hard-core gold bears.

Unfortunately, the reason is not a happy one. All these “in the know” people are very worried about the direction the markets are taking.

This article is a short report that details what five of these well-known asset managers see coming down the pike over the next few years—and why gold is the best hedge against the looming crisis.

MARK YUSKO: YOUR PURCHASING POWER IS BEING DESTROYED

At the conference, Mark Yusko, CIO and CEO of Morgan Creek Capital Management, gave an emotional speech comparing the Fed to a dictator that robs the nation.

He pointed out that despite $20 trillion being injected into the US economy through quantitative easing since 2008, the results haven’t matched the effort…

This increased money supply, he said, resulted in currency devaluation. “This is what dictators do. They systematically acquire the assets, and then they devalue the currency and boost the price of assets.”

He showed a chart that plots the S&P 500 price in nominal terms (blue line) and in gold (pink line).

Put simply, he said, record-high valuations in equity markets are the result of a devalued currency and monetary measures that the Fed pursues: “The purchasing power of the currency is being destroyed right before your eyes, and you’re just not paying attention.”

JEFF GUNDLACH: GOLD WILL BREAK OUT IN A BIG WAY

Jeff Gundlach, CEO of Doubleline Capital, provided a more technical forecast for gold. Given the situation in the markets, he thinks it’s only a matter of time before the gold price breaks out:

We’re at a juncture in gold, not surprisingly, because it is negatively correlated with the dollar… Now we see a massive base building in gold. Massive. It’s a four-year, five-year base in gold. If we break above this resistance line, one can expect gold to go up by, like, a thousand dollars.

Gundlach was reluctant to predict the probability and timing of this massive gold rally, but he thinks that investing in gold at this price is a no-brainer: “It’s a great time to be buying gold… because one way or the other, this baby’s got to break in a big way.”

LOUIS GAVE: GOLD WILL SHINE IN THE COMING INFLATIONARY BOOM

Louis Gave is the co-founder and CEO of Gavekal Research. The main theme in his keynote speech this year was a once-in-a-generation shift from a deflationary boom to the inflationary boom that we see today.

Below is a four-quadrant framework that Gave uses to determine where we are in the cycle:

According to Gave, these shifts occur every 30 to 40 years, usually as a result of policy errors.

As a method to determine where we are in the cycle, Gave suggested using the gold/bond ratio: “My starting point is always that… over a four-year period, bonds should always outperform gold… When they don’t, when bonds underperform gold, that’s the market giving you a very important signal.”

He pointed out that gold has been outperforming bonds for the past four years now. “This, to me… means we are moving to an inflationary boom and bust period.”

If that’s the case, Gave told the attendees, the investing environment will radically change.

He suggested that investors reconstruct their portfolios and get out of bonds as a diversification tool because they are not a good diversifier in periods of inflationary booms.

To prove his point, Gave showed a chart of the performance of gold, cash, and US Treasuries as hedges during inflationary booms (see below).

In the last inflationary boom, from 1966 to 1980, Treasuries were a horrible choice for investors’ portfolios. Meanwhile, gold and cash shined.

Another positive trend for gold that Louis Gave sees is the growth of emerging markets (EM). That’s because higher purchasing power in EMs tends to translate into higher gold demand: “…for me [gold] is a good proxy for emerging market growth. When people get rich in an emerging market, they buy gold. And the reality is today people are getting rich in emerging markets at an accelerating pace.”

He said that growth in emerging markets combined with rising inflation and a weak dollar create a perfect setup for a gold rally in the coming years: “I think the time indeed has come for having gold in your portfolios.”

GRANT WILLIAMS: A SHIFT IN US MONETARY POLICY SPELLS TROUBLE FOR EQUITIES

Grant Williams, author of Things That Make You Go Hmmm…, warned investors about the dangerous implications of a shift in US monetary policy—another good reason to invest in gold bullion now.

According to Williams, for the last 40 years, US monetary policy has been built on constant injections of stimulus. Since Paul Volcker’s tenure in the early 1980s, every Fed chair has pushed interest rates lower.

Now QE is officially over and is to be reversed. Williams thinks that this marks a monetary shift, which spells trouble for equities.

He gave a brief rundown on the effects that the Fed’s three rounds of QE had: “Stocks soared. The S&P doubled under the Fed’s various QE programs. Gold fared really well because of fears of inflationary effects of money printing. The dollar eventually eked out a small gain. And the yield on the [10-Year] Treasury fell 1.6%.”

The key message for investors is, Williams said, that after nine years of one long, pleasant ride in equities, we’ve reached the point where the main driver of equity prices is about to reverse.

In the best case scenario, he thinks quantitative tightening will reverse the effect of the Fed’s stimulus measures on the stock market. However, he doesn’t rule out a much bigger sell-off.

Asked what investors should do, Williams joked, “Long the Zambian kwacha versus the US dollar. Ah, who the hell am I kidding—it’s gold! Of course, it’s gold!”

Williams likens today’s situation to the period leading up to the 1970s recession where a shift from equities and cash to gold could happen unexpectedly fast.

What happened with that late-cycle stimulus that Johnson put in, and what happened to equity markets, bond yields, wage prices, CPI, and gold, going into the late ‘60s into the early ‘70s, we saw these things take off. And these things are cyclical. So to me, if this inflation story gets some traction, then I think you’re going to see money move to gold reasonably quickly.

Further, Williams suggested, in periods of quantitative tightening, equities eventually crash. Since gold is inversely correlated to the stock market, this is another reason gold should rise in the coming years.

In fact, history shows that gold has rallied in the last five out of seven recessions. 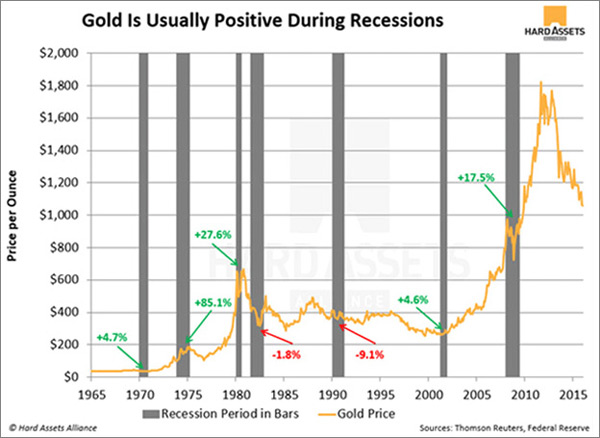 DAVID ROSENBERG: THERE’S NO BETTER HEDGE AGAINST A WEAK DOLLAR THAN GOLD

Yet another speaker who praised gold was David Rosenberg of Gluskin Sheff.

The biggest reason for Rosenberg’s bullishness on gold is the United States’ protectionism, which he thinks will inevitably push the dollar down:

We’ll get a countertrend rally in the US dollar, maybe three to four percent, and then it’s going to go right back down again. Because you have a protectionist government, and part of that protectionism, what is a better tariff than just depreciate your currency?

Rosenberg suggested buying gold as hedge against a weak dollar: “Gold is perfectly inversely correlated with the US dollar. If you want to hedge against the US dollar as opposed to inflation… you have to have some gold in your portfolio.”

FREE EBOOK: INVESTING IN PRECIOUS METALS 101: HOW TO BUY AND STORE PHYSICAL GOLD AND SILVER

Learn how to make asset correlation work for you, how to buy metal (plus how much you need), and which type of gold makes for the safest investment. You’ll also get tips for finding a dealer you can trust and discover what professional storage offers that the banking system can’t.

It’s the definitive guide for investors new to the precious metals market. Get it now.